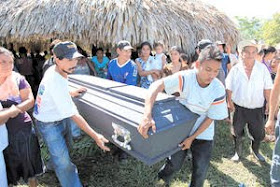 Two week after the most recent massacre of campesinos in Aguan the war against the campesinos continues with military actions on the ground and a media campaign accusing the Nicaraguan government of allowing gun running and guerrilla training by the campesino and resistance movement.

On November 23 the Honduran armed forces seized the regional office of the National Agrarian Institute (INA) under the pretext of searching for weapons. Hundreds of troops were involved, terrorizing the 60 campesino families that have been staying on the property after being displaced by a recent tropical storm, and refusing to allow INA staff entry to their offices. The Lobo regime also announced that it would be evicting campesinos from disputed lands and it began doing so on December 3rd when 130 troops were sent to displace campesinos in El Tumbador, the community that was the victim of the November 15th massacre.

The accusations of gun running and guerrilla training in Nicaragua made by the Lobo regime were answered on November 29th by the head of the Nicaragua military, Julio Cesar Aviles Castillo who stated that with these false accusations that Nicaragua the Honduran regime joins an “international conspiracy” by various countries seeking to “protect expansionist interests” against Nicaragua. The accusations of Costa Rica that the Nicaraguan army invaded its territory, the Lobo regime’s claims of Honduran guerrillas being armed and trained in Nicaragua “are false and part of a strategy Developed in collaboration with Colombia’ Aviles asserted. Commander Aviles also noted that the Honduran media itself shows that the problem in Aguan is a conflict over land between campesinos and private businessmen that has led to deaths from firearms.

In the face of the violence and militarization in the region, the Human Rights Platform and Agrarian Platform convened a press conference on November 29th. In an interview with defensoresenlinea.com, coordinators of the Campesino Movement of Aguan (MCA), Adolfo Cruz and David Cálix denounced the attacks on the campesino movement in Aguan including the seizure of the offices of the INA.
Adolfo Cruz affirmed that “We are living under terrorism of the State and the paramilitary and its intention is to destroy the process of land recuperation and agrarian reform in Aguan.” 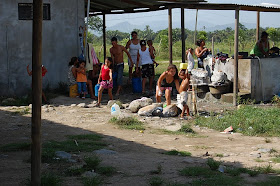 “The massacre on November 15th was one more repression by a new army, made up of reservists trained by high ranking officials with the objective of defending the lands usurped by Miguel Facusse with the complicity of the Lobo regime”, stated Cálix.


At the press conference campesinos presented photocopies of documents that showed that the MCA peasants have legal tenancy to the land. “The National Agrarian Institution has enormous archives of property documents, not only of the MCA but fro the whole region...” David Cálix told defensoresenlinea.com alter the press conference, emphasizing the importance of avoiding the military plunder of the INA office. “The army is trying to intimidate us, letting it be known that they are the repressive force and that, according to them, we have to do what the golpistas say. If the documents of the INA are lost it will be the responsibility of the army that arrived (at the office) looking for weapons when all they found was documents.”

Adolfo Cruz stated that “our philosophy is not for war, the guerrillas were from the last century, our strategy is the recuperation of the land through the non violent, legal path in order to provide food to our families; we need the land to work and to survive; we know that the neoliberal policies in Honduras mean that we the poor are poorer and the golpistas every day have more millions. The lands of the MCA are lands that the government paid for three times for the Agrarian Reform and during the course of the 10 years that the MCA has been planning there the work of the INA (on the case) has not finished. Miguel Facusse ACAPARO some of the land to grow African palm through a loan from the World Bank”.

Asked why the Lobo regime would raid an agency of the government itself, Cruz responded that the government, “ wants to execute its plans with impunity as happened with the events of November 15—the golpistas can massacre our compañeros campesinos in plain sight of the Lobo regime. The golpistas and landowners want to crush the Agrarian Reform in Aguan that we have struggled for with the cooperatives – they want to displace us with paramiliary violence”.

Cruz also noted that the Lobo regime should be worried about poverty, human rights and justice and the activities of the military and Facusse’s paramilitaries, not making false accusations against the campesinos based on misinformation- “It is the government of Honduras that is guilty of the deaths of 20 peasants in Aguan”. 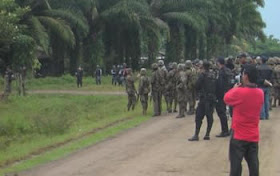 Regarding international politics and the anti-terrorist legislation, Cruz stated that, “we know there is a plan, in the region of Aguan there are foreign persons infiltrated into the army, the police and the paramilitaries. The visit of Alvaro Uribe (former President of Colombia) is part of a well executed plan of Colombia and Honduras to draw attention away from the problems and, at all costs, to eliminate the process of agrarian reform through the use of advisors, Colombian paramilitaries and the media campaign.

When asked about the formal agreement that the MUCA and Lobo government signed and the relationship between MUCA and the MCA, David Cálix responded that the MUCA communities of 3000 campesino families, “were looking for a way to survive and wish that the promises made by Lobo would have been true, but at this point none of the signed agreements have been fulfilled”.

“Among our strategies is mutual accompaniment by the MCA and the MUCA to exhaust all the legal recourses and to recuperate the lands that belong to us. We have always had good relations with MUCA; when they were evicted we gave them refuge in our houses…we have never participated in violent movements, the MCA and MUCA recuperate land in a non-violent way, through marches, blocking the highways and even with strikes to paralyze agricultural production in Aguan until our rights and tenancy on the land is respected.”
Both men emphasized the importance of the human rights organizations, the Human Rights Platform, sending a delegation to Aguan to counter the violence and insecurity in the region caused by the paramilitaries.

Cálix emphasized, “We know that in the governmental ambit there is no one who supports us, we hope for the solidarity of the national and international community”.

Cruz added, “It is sad to go to pick up the cadavers of our compañeros of the MCA who didn’t even have a belt, just a piece of rope, and to see the greed of the landowner Facusse who is obsessed with assassinating the campesinos. We don’t want any more blood baths.”

This article is condensed from articles by Red Morazanica de Información; defensoresenlinea.com and other news reports.-December 3, 2010.