From June 27th to July 10th a delegation of Chicago teachers and students traveled in Honduras meeting teachers, youth and many activists in the Honduran resistance (see separate blog entries for more reports). Below is a short report written by Jackson Potter from the Chicago Teachers’ Union about conversations with Honduran teachers’ unions.

At dinner in Tegucigalpa, Oscar Rescate, president of Copemh, the union of middle school educators of Honduras, described his life after the 2009 military coup where he was threatened, followed and ultimately had to take refuge under the protection of the well known human rights organization COFADEH in Tegucigalpa. Copemh is one of the strongest of the 6 teacher unions in the country. By all accounts, teachers have played a leading role in the resistance against the military controlled government over the last four years, and they have paid dearly for it. More than 25 teachers have been disappeared and assassinated for their political courage.

Rescate described the escalating repression of teachers over the last four years. Efforts that include diminishing the pensions that teachers have earned throughout their careers, elimination of legal protections such as automatic dues checkoff (so that the union is guaranteed membership dues in order to function on a monthly basis), indiscriminate firings, months and years without being paid, and burgeoning class sizes requiring students to sit on the floor. 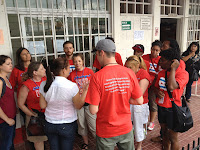 A central source of these attacks has come from international financial institutions such as the InterAmerican Development Bank of the Organization of American States which famously called for the elimination of teachers unions presumably because they represent the biggest obstacle to removing worker protections and the privatization of public services. Teachers also have proven to be very good at mobilizing large numbers of people to support free education for all, subsidized transportation for students throughout the country and the former President Zelaya's agenda to raise living standards for the most vulnerable Hondurans.

Moving forward, Rescate is calling for an educational system modeled off the Finnish example. He points out the need to invest in school infrastructure, invest in more robust teacher led professional development opportunities and institutionalize the respect for teacher rights.

While our delegation was impressed with Recate and Copemh, not all rank and file teachers are satisfied with the work of their unions. We also met with teachers who belong to Colprosumah, the biggest of the 6 teacher unions in the country. About 10 teacher leaders explained to us that their leadership has spent too much time maintaining their power, their relationship with the government in order to preserve the perks and high salaries that they have become accustomed to. The CTU members on the delegation shared similar stories about our union under the former leadership of the corrupt UPC under Marilyn Stewart.

The Colprosumah teachers also shared their concerns about the inordinate amount of focus by the resistance upon an electoral strategy to solve the problems of the country. They wonder about the Libre party's claims that Honduras will experience a “refoundation” because that term means “something and nothing at the same time.”

Moving forward the rank and file teachers of Colprosumah promised to fight for their union. They are looking for the Supreme Court to monitor their internal elections because of potential fraud. Lastly they criticized their leadership for working with the Minister of Education to pass a law that allows parents the ability to become teachers without any certification.

Members of the CTU and CORE shared our approach to rejuvenate our union which served to transform the CTU into a fighting organization capable of leading a successful strike this past fall. We discussed the need to work closely with parents and community allies and demand democracy and transparency. The Honduran educators were thankful for the exchange and believe that rank and file teachers like them and us, are the ones who ultimately have the power to shape and transform their unions, the education system an the society at large.